Purusha and prakriti are two abstract entities clearly defined in sankhya philosophy. It is quite similar to the yin and yang principles of Chinese philosophy. Sankhya philosophy is one of  the six main schools of Indian philosophies  also known as shad darshans. It is a dualistic and realistic philosophy which discusses the  two main  principles called purusha and prakriti in a detailed manner. Purusha and Prakriti are two basic, opposite, independent and eternal principles that are the main cause and reason behind the human existence. Purusha is a Sanskrit term which means spirit, person, self or consciousness in Indian philosophy. In Sankhya it means the principle of spirit or pure consciousness. It represents the male aspect of creation. Purusha is an inactive, unchangeable, universal and eternal entity. It is innumerable as there are human beings. Prakriti simply means nature. Prakriti is the principle of matter or substance. It is a non self without consciousness. Prakriti is active, changeable, earthly and eternal entity.  It represents the female aspect of creation. The entire universe is created out of Prakriti or the fundamental matter. According to Sankhya the world is created as a result of the union between Purusha and Prakriti.

Sankhya is one of the oldest orthodox systems of Indian philosophy. It is founded by Sage Kapila. His work was originally known as Sankhyasutras.it contains six chapters and 526 sutras in all. A brilliant commentary was written on it by Vijyanabhikshu named Sankhya -Pravacana-Bhashya. It was further sustained and spread by Kapila’s disciple Asuri and his follower Panchashikha. The earliest reliable work on Sankhya that is available is called Sankhyakarikas by Isvarakrishna.it is also known as Sankhya Saptati. Many commententaries are wriiten on it like Sankhyakarika Bhashya of Gaudapada (A.D.700) and Sankhyatattva Kaumadi of Vachaspati(A.D.840).

Sankhya derives its name from Sankhya which means number, it mentions 25 ultimate principles in creation which justifies its name. It has been applied to Sankhya philosophy because it tries to find the right knowledge of reality by specifying the final objects of knowledge. Another meaning of Sankhya is jnana(samyak khyayate). It believes that jnana or right knowledge is the only means of liberation. Sankhya tries to know the knowledge of reality for ending all the pains and sufferings and attain liberation.It talks about the knowledge of the self which is clearly higher than what is mentioned in other philosophical systems except Vedanta. It is clearly characterized as the Sankhya in terms of pure metaphysical knowledge of the self. It is intellectual and theoretical in nature. It is a metaphysics of dualistic realism. It is dualistic because it speaks about only two types of ultimate realities namely purusha(spirit) and prakriti(matter). Sankhya shows an evident dualism between purusha and prakriti and further maintains the plurality of the purushas. It is silent on god. It is a pluralistic spiritualism and an aesthetic realism and rigid dualism. Sankhya is realistic as it believes that both the matter and spirit are equal and real. It is pluralistic also because it states that there are many purushas that coexist with prakriti in this world. Sankhya philosophy states that kaivalya or liberation from the birth-life-death-rebirth cycle as the final goal of human life. This liberation results in ultimate freedom for man from all the miseries and sufferings of human life. Sankhya says that that the main purpose of the evolution of the prakriti into this world is to give the purusha one more chance for liberation. The main cause of bondage of the purusha and his consequent suffering in the world is aviveka(ignorance, non- discrimination between himself as pure consciousness and prakriti which jada(the unconscious entity)it is this that is leading him from birth to death ,or from life to life again and again. Sankhya defines two kinds of liberation jivanmukti and videhamukti.

Jivanmukti is attained even while living here, the body continues to live for some more time, till the prabhdhakarmas(past deeds of previous lives)are exhausted. In this state the perfect being continues to live in the world, though not of the world.

Videhamukti means the final liberation that comes after the death of the body. Here the person will never come back to this material world. He will attain a perfect state free from all pain and suffering without bliss. However since chaitanya (consciousness) is his essence, he will always remain in his own state.

Aspects of Purusha (Consciousness) and Prakriti(Nature)

The Sankhya school of philosophy recognises two eternal principles called Purusha and Prakriti. The basic nature or Prakriti and the individual souls or Purusha coexist with one another. Purusha is eternal, something that does not create, uncreated, passive, absolute, infinite, pure, neither the cause nor the effect, consciousness and indestructible. Prakriti is eternal, uncreated something that creates, dynamic absolute, infinite, cause and active.

Sankhya states that a fine and subtle matter or principle is the basis of our physical existence.it is is called Prakriti or nature.it is the primal substance behind the universe.it is the material cause of the world, it is the first and foremost cause of all the gross and subtle objects. It is non self, incomprehensible and without consciousness.it gets affected and influenced by the Purusha(self or the spirit). It can only appear as the various objects of experience of the Purusha.

Sattva is the guna whose key elements are purity, fineness and subtlety. It is a constituent (part) related to lightness, brightness and pleasure. Sattva is associated with ego, mind and intelligence. Its connection with the consciousness is the strongest. Although sattva is the important condition for consciousness, consciousness forms the main basis of the purusha.

Rajas is the guna whose key elements are action, restlessness and passion.it is a constituent (part) related to actions of objects. Rajas is associated with activity and motion.in material things and objects motion and action are caused by rajas. In living beings activity, restlessness and pain are a result of rajas.

Tamas is the guna whose key elements are ignorance, dullness and inertia. It is a constituent(part)related to laziness and inaction.it opposes motion and activity in all material things and objects. In living beings it is associated with coarseness, negligence, carelessness, and inactivity. It is present in man as ignorance, insensitivity and inaction. 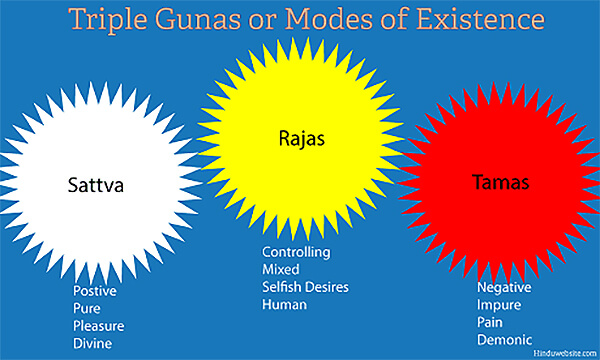 According to Sankhya, the effective cause of the world is Purusha and the material cause is the Prakriti. Here Purusha stands for “Supreme Spirit” and Prakriti stands for “Matter”. Purusha(spirit) is the first principle of sankhya. Prakriti(matter) is the second principle of Sankhya. Purusha is neither produced nor does it produce. Prakriti is not produced but it produces.

THEORY OF EVOLUTION ACCORDING TO SANKHYA

In ancient times the word Evolution (Parinama) was not used as in the modern sense. They saw it in a broad manner as not only as evolution of organic matter but atoms and consciousness also in connection with the soul.it was believed in olden times that the objective realty was not stable. Things changed from one form to another, within nature (prakriti) while it’s all-inclusive energy/matter remained stable. According to Sankhya nature is a blind force which is self-operating like a machine. All the causes and effects lie hidden in it. So it does not create anything new but brings out what is already present in it as a fixed program. Nature (prakriti) is both cause and effect. It is not created but creates. It is permanent but changeable. Things evolve in nature at the most basic and structural level with the elementary units called tattvas. Nature comes into action when it meets the purusha or individual soul. The changes in prakriti begins as it comes in contact with purusha. Their meeting causes the prakriti to become active and start evolving.

The creation or evolution of the world begins with the samyoga or effective contact of purusha(consciousness) and prakriti(matter).the totality of the karmas of the purushas disturbs the balance of gunas in prakriti and starts the process of evolution. So the first development with in nature upon contact with purusha is disbalance in the three qualities or gunas namely sattva(purity, dispassion and light),rajas(activity, passion and intensity)and tamas(inactivity, ignorance and darkness). As a result of the gunas mixing with one another, the first product of evolution of prakriti is mahat or buddhi( the cosmic intellect). It is the natural function of buddhi to manifest itself and other things. Buddhi is different from purusha or the self which goes beyond all physical things and qualities. But it is the base of all intellectual processes in all individual beings. After that the second product that arises directly out of mahat is called ahankara (cosmic ego, the principle of individuation). The function of ahankara is the feeling of “I and mine” (abhimana) it is because of ahankara that the self considers itself wrongly indeed to be an agent or a cause of action. A desirer of and striver for end and a feeling of ownership. There are three kinds of ahankara according to the predominance of one or the other three gunas. 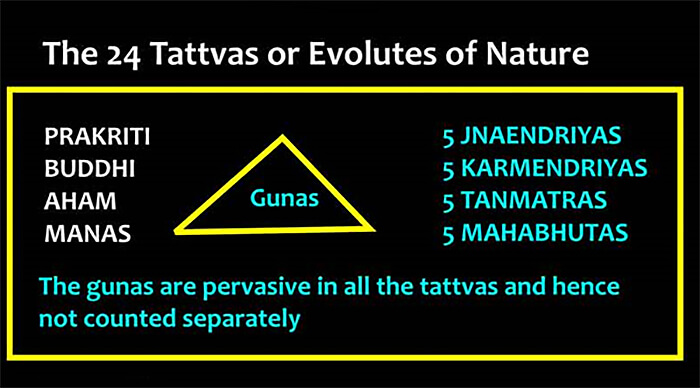 The first one is called vaikarika or sattvika when the element of sattva predominates in it, second one is called taijasa or rajasa when the element of rajas predominates and the third one is called bhutadi or tamasa when the tamas element predominates. The sattva ahankara gives rise to the eleven organs, namely the five organs of perception (jnanendriya), the five organs of action (karmendriya), and the mind (manas). The tamasa ahankara gives rise to five subtle elements of earth, water, fire, air and ether (tanmatras). They further evolve into the five mahabhutas or gross elements (of earth, water, fire, air and ether). The rajas ahankara is involved in both the sattvika and tamasa ahankara, and supplies the energy needed for the change of sattva and tamas into their products.

In all, including the prakriti , there will now be 24 cosmic principles or elements. The rest of creation takes place by their permutation and combination, each purusha getting involved with a psycho-physical complex(body)according to his deeds (karma). There are two stages of evolution namely the psychical  and the physical. The history of the evolved universe is a play of twenty four principles, of which prakriti is the first, the five gross elements are the last, and the thirteen organs(karanas)and five tanmatras are the intermediate ones. 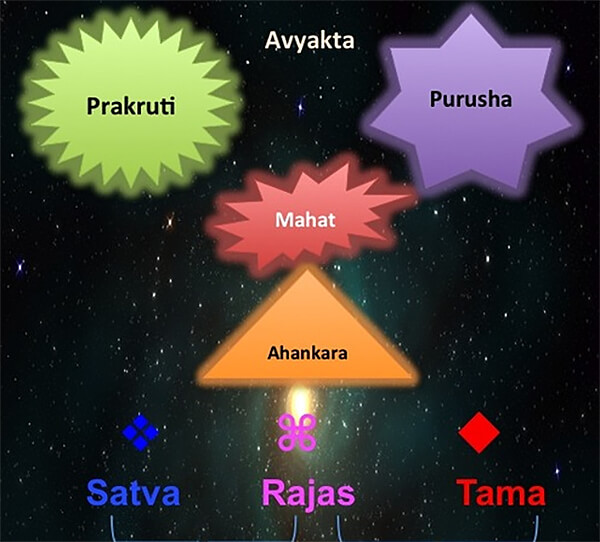 The 24 realities (tattvas) emerge or evolve out of nature (prakriti) each having the predominance of one or more gunas. The 24 tattvas or evolutes of nature are:

For further reading and proper understanding go through the following texts:-