The word Bhakti is derived from a word ‘’bhaj’’ which means’’ to be attached to God’’.
Bhakti means a  continuous, one directional and steady  flow of pure  love, devotion and adoration for one’s chosen Ideal (Ishtam) (The GODHEAD).The word Yoga is derived from a sanskrit  word ‘’yuj’’ which means to combine, connect or join together. Yoga can be be defined as the union of the Jivatman (Individual Self or Finite )with the Paramatman(Universal Self or Infinite). The path of Bhakti or highest devotion is called Bhakti Yoga. It requires complete surrendering of one’s own self at the altar of one’s Chosen, Ideal/Ishtam.

Bhakti yoga is one of the paths for  realizing one’s true identity or self realization. Bhakti is a  deep and  intense  devotion  for any  SAGUNA(definite form) of one’s chosen Ideal/Godhead. There are a no of  ways of reaching the ultimate reality. Karma Yoga, Jnana Yoga, Raja Yoga and Bhakti Yoga are the four main types of yoga for realizing one’s true self. Bhakti Yoga is the easiest and best way to reach the absolute reality in present times.Bhakti Yoga is the highest point of pure and intense love for one’s Ishtam(Chosen Ideal) .Bhakti yoga completely erases all the  samskaras (mental impressions) related to  our karmas (actions ). It also frees its followers from the chain of birth-life-death-rebirth cycle.

Bhakti is like nectar, which when one drinks ,leads to the experience of  permanent  bliss.

After achieving Bhakti one reaches the state of perfection. The Bhakta(Devotee) attains immortality like God and all its desires are completely fulfilled. Through Bhakti or devotion a Bhakta goes beyond the worldly desires and bondage. It becomes a mere instrument in the hands of God. The Bhakta becomes free from the cycle of birth and death.

Ways of Realizing One’s Self through Bhakti Yoga

Bhakti is not based on any conditional state of mind. It has no pre-conditions or pre-qualifications. There is no specific method or formula for Bhakti Yoga. The only condition required in Bhakti is to surrender all our actions at the feet of God and become egoless.

The path of Bhakti is particularly followed by people having a high emotional quotient. The Bhakta (devotee) is driven mainly by the power of pure love and sees one’s chosen ideal as an Incarnation of love. Prayer,Worship and Ritual are the primary means of Bhakti Yoga. The Bhakta(devotee) completely surrenders itself to it’s chosen ideal. The Bhakta directs and transforms its emotions into unconditional love and devotion. Chanting or Singing the praises of one’s chosen ideal is an important part of Bhakti Yoga. There are five main  enemies of one ’s self viz anger, delusion, envy, pride and lust. They have to be given up completely for filling oneself with Bhakti or the extreme devotion towards one’s Chosen Ideal. As the crystals of sugar get dissolved in water and lose its identity completely so is the Bhakta who completely gives up his pride, ego, hatred, ill will and self identity for one’s chosen ideal.

Though Bhakti is endowed with God’s grace, yet it can be cultivated by constantly involving ourselves in various devotional practices. Bhakti brings us closer to God and its grace flows through us.

Types of Bhaktas and Some Famous Bhaktas

There are mainly four types of Bhaktas:

Chaitanya Mahaprabhu, Kabir, Mira bai, Tulsidas, Raidas, Valmiki, Surdas, Narada,Narsingh Mehta and  Bhakta Prahlad  are some of the famous devotees of  of Bhakti Yoga.All of them were completely filled by extreme love and devotion for their Chosen Ideal.

Navavidha Bhakti or Nine Modes of Bhakti or Devotion 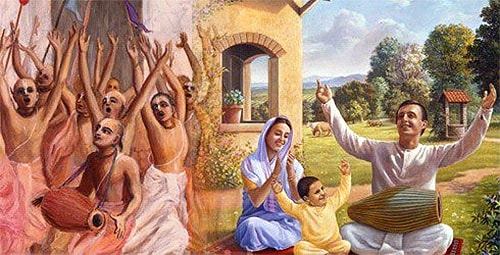 Srimad Bhagwatam(The Fifth Veda or The Mahapurana) talks about  Nine forms  of Bhakti. If they are cultivated and practiced regularly they will surely take us closer to God. A devotee can choose any of them to attain self realization. The following are the Nine ways involved in Bhakti Yoga:

A Bhakta or devotee can practice any of these whichever suits its nature.

Love and devotion are regarded as the most noble virtues.

A man without love or devotion is similar  to a fish without  water or a bird without  feathers or  a plant without  flowers. Bhakti yoga is a culmination of unalloyed love. It provides a way for channelizing one’s pure emotions towards one’s Chosen Ideal to reach our final goal of life: Self realization

Bhakti yoga is the easiest and perhaps the best way of realizing one’s true self for uniting with the divinity while living in this mortal world.